An Update on the Ashler Hills Neighborhood Park Project

Renderings Courtesy of the City of Scottsdale

The Ashler Hills Neighborhood Park project has been a hot topic in Scottsdale North for years. We recently talked to Nick Molinari, Scottsdale Parks & Recreation’s director, to learn about the latest developments.

Scottsdale North News (SNN): What is the latest news on the park project?
Molinari: The planning process for Ashler Hills Neighborhood Park is underway and the city of Scottsdale recently completed a second virtual public open house process to solicit further feedback on updated design elements in the park site plan.
Based on feedback received during the first open house, an exercise course was added to the walking path, improvements and shade were added to the pickleball courts, and additional details were provided about the lighting plan. The design team will look over feedback from the second virtual open house and evaluate options.

SNN: What are the next steps in the process?
Molinari: The project will now move into the structured planning process and public meetings will soon be scheduled with the Parks and Recreation Commission, the Development Review Board, the Planning Commission, and, ultimately, Scottsdale City Council. At this point those meeting dates have not been established, but the project team is working to establish a timeline as soon as possible. 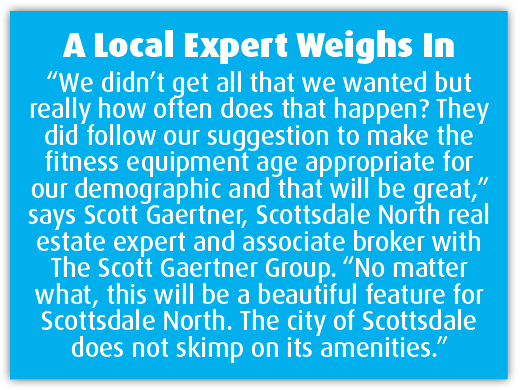